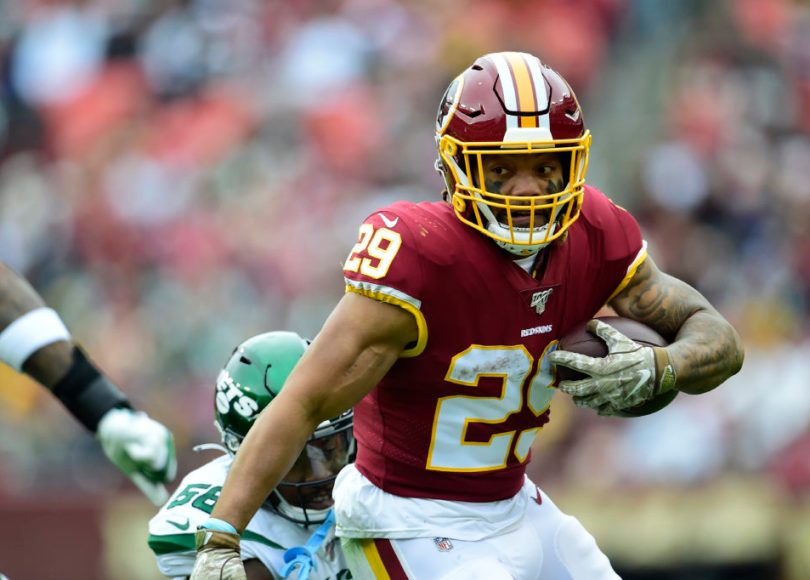 Here we go, the 2019 fantasy football playoffs start now. Every decision from here on out could make or break your team. And, to be honest, it’s a bit of an odd week. Some of you will be battling it out in the first round. Others will be playing in the consolation playoff, which nobody really cares about. Then, there are those of you that are blessed with a first-round bye. I’d be right there with you, if I hadn’t decided to list Tyler Higbee as a must-start tight end last week. He shredded the Cardinals defense for 107 yards and a touchdown. My opponent decided to listen to my advice and that decision cost me a bye (well played, Ryan). The sooner I forget about that, the better.

As always, let’s take a quick recap of Thursday’s game. The Chicago Bears kept their slim playoff hopes alive with a 31-24 victory over the slumping Cowboys. Where has that offense been all season? Hats off to those of you that dared it all and started Mitch Trubisky. He posted a monster game, with four total touchdowns and 32 fantasy points. Several other players also put up respectable scores – Elliott (23.3), Robinson (21.8), Cooper (20.3) and Gallup (16.9).

Looking ahead, Sunday offers us several games that have major playoff implications. In the AFC, the number one seeded Ravens take on the Bills. We also get a great match-up when the Chiefs travel to New England to take on the Patriots, with Mahomes vs Patriots defense a must-watch. Over in the NFC, two teams that are hoping for a first-round bye will battle it out when the 49ers head to New Orleans. The day then closes out with a juicy clash between the Seahawks and LA Rams, in a game that the former simply cannot afford to lose.

It’s fair to say that Aaron Rodgers has had a topsy-turvy fantasy year. For every good game, he’s also had a stinker. The good news is that his main target, Davante Adams, is quickly returning to full health. Last week, Rodgers threw four touchdown passes and scored 28.12 fantasy points in a snow game. Expect that to continue when he takes on a Redskins defense that has given up the eighth-most passing touchdowns this season (22).

It’s crunch time for the Eagles. They cannot afford another slip up after a surprise loss to Miami last week and Carson Wentz has a reputation for coming in clutch when it matters. Despite last week’s loss, he posted 24.4 fantasy points. He gets a positive match-up when the Eagles play a Giants team that has allowed five quarterbacks in a row to score 20 or more points

Since returning, Drew Brees has yet to score over 25 fantasy points in a game. In two of those five games, both against Atlanta, he scored 11 points. Of course, Brees is capable of putting up monster stats in any given week, but the risk isn’t worth it this week. He’s up against a number one ranked 49ers defense that is giving up just 134.2 yards per game. That defense is also 8-0 against pocket passers, allowing only 10.6 points per game.

Carr’s fantasy output has quickly turned sour. In his last four games, he’s thrown only three touchdowns to four interceptions, and topped 230 yards in just one of those games. He scored four points against the Jets and nine points against the Chiefs. The Raiders have a tough match-up against the Titans this week, so Carr should be avoided.

You should check the availability of Derrius Guice right now. He’s owned by just 68% of NFL.com fantasy owners. He destroyed the Panthers last week, with two touchdowns and 27.7 points. Guice has a great opportunity to post another strong performance this week when the Redskins take on a Packers defense that is ranked 25th against the run.

Despite been part of a backfield committee, Mostert should be taken into high consideration for those of you that require a high-risk, high-reward running back. Mostert has scored touchdowns in two consecutive games and is coming off a strong performance against Baltimore, with 23.4 fantasy points. While the Saints have a strong run defense (ranks third), the 49ers run scheme should find ways to gain positive yardage.

Drake hasn’t found the end zone since his first week as a Cardinal. It’s tough to trust a runner whose team has very little to play for and with the Cardinals down 20-0 in the first half last week, he gained just 31 rushing yards. He has a very tough match-up this week, as the Cardinals take on a Steelers team that is battling for a Wild Card spot. The Steelers held Nick Chubb to under 80 total yards last week and that trend should continue with Drake this week.

With Kalen Ballage heading to IR, you may be tempted to roll the dice with Patrick Laird. Yes, he’s at the top of the Dolphins depth chart. However, there are no guarantees. He’s going up against a Jets defense that ranks first in rushing yards allowed. That’s a big risk to take considering the Dolphins could find themselves behind early.

Calvin Ridley is quickly having another very good year. He’s ranked 19th among qualifying receivers and has posted double-digit scores in three consecutive games. He faces up against a Panthers team that is in turmoil after firing their longstanding coach, Ron Rivera. Big numbers are a real possibility.

Paschal was one of the few bright spots for the Colts last week, catching seven of 10 targets for 109 yards. He’s generally stepped up for his team when needed this season and will get a great opportunity this week. The Buccaneers defense is giving up the second-most passing yards per game (281.8) and has allowed 27 touchdowns through the air. Owned by just 5.2% of NFL.com fantasy owners, he should be taken into real consideration this week.

Take out his incredible first-week performance (198 yards, 3 TD) and Sammy Watkins has been pretty average all season. He hasn’t found the end zone in any game since then and has seen just six targets in his last two games. With the swarming Patriots defense on the horizon, it’s best to avoid Watkins this week.

In his two games since returning, Brandin Cooks has been uninspiring for fantasy owners, posting just 32 and 24 receiving yards. With Cooper Kupp and Robert Woods on the team, Cooks should be avoided until it’s proven that he can register consistently. And, there’s a real possibility that we won’t see great numbers for the remainder of this season.

Any tight end that goes up against the Cardinals automatically makes the list, regardless of previous fantasy output. Over their 12 games this season, the Cardinals have given up 13 touchdowns to tight ends. So, the Steelers would be crazy not to include McDonald into their game plan this week.

After a slow start to the season, Ryan Griffin has been a fairly consistent tight end starter. In four of his last seven games, he’s put up double-digit points. He’s also scored 40.2 points in his last three games. He gets a great matchup against a Dolphins defense that has given up 29 receiving touchdowns, the second most in the league.

Dawson Knox clearly has great potential and will be a Bills starter for the foreseeable future. However, he’s only found the end zone twice all season, topping 10 points in just one game since Week 3. Meanwhile, the Ravens have only given up 10+ points to one opposing tight end all season, giving up 34 yards or less to all tight ends since Week 4.

Howard is coming off a season-high in catches, with five last week. His 61 yards were the second-highest of the season. Despite this, he should not be considered as a feasible starter. He’s found the end zone just once all year and is fighting for targets with Cameron Brate. Avoid at all costs.Projection: 35 receiving yards.