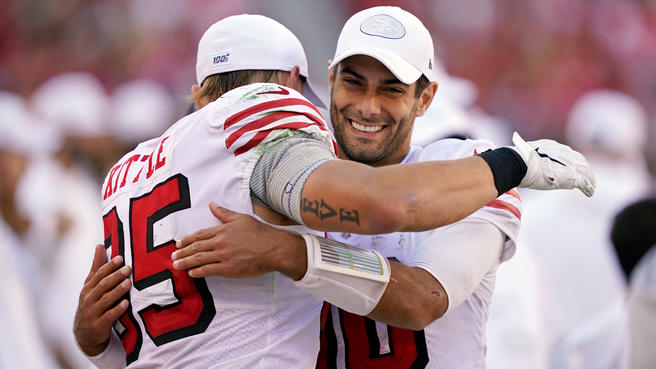 Week 9 ladies and gents, into the second half of the season already and if it’s as good as the first half then we’ll have had a good season indeed. We are coming off a poor showing last week but the good news is I saw it coming when I looked at the awful slate we were presented with in Week 8 and adjusted accordingly with just the two selections. The over in the Raiders/Texans game fell short by one point which was very frustrating, although the Buffalo Bills were pretty poor against the Eagles and it never really looked like they were going to win. On to this week and first up, the San Francisco 49ers head to the desert to take on the Arizona Cardinals in an NFC West divisional clash.

We’re on Nick Bosa sack watch tonight with him sitting on seven for the season, just five more for Sky Bet’s 100/1 RequestABet on him getting 12 sacks this year to come in. With Kyler Murray currently fourth in the league for sacks taken (25), I fancy our chances of another couple tonight.

It’s not just Nick Bosa getting it done on the Niners defense though; over the last four games, this unit has given up 23 points combined. I’ve been pretty sceptical about how good this defense really is, and if you just run down the list of opposing quarterbacks they’ve had to face you can see why – Winston, Dalton, Rudolph, Mayfield, Goff, Keenum and Kyle Allen. To put that into perspective, the best quarterback they’ve faced in terms of QBR is Case Keenum with a rating of 49.4, that’s 18th in the league. That’s not to say this isn’t a very good defense. After all, they have held each of those QBs below their season average in QBR, which is what you’d expect of a good defense. On top of Bosa’s seven sacks, Arik Armstead has five-and-a-half and Dee Ford has tacked on another four-and-a-half. This is a unit that ranks first in the NFL for total defense, second for scoring defense, first for yards per play allowed and second for red-zone defense.

The defense has led the way in the Golden State but the offense isn’t far behind. Under the tutelage of one of the best coaches in the NFL in Kyle Shanahan, they are third in the league in scoring offense. There’s been a fair bit of stick for Jimmy Garoppolo this year, perhaps it’s because every other part of the team is almost impossible to criticise, but I think a lot of it has been unjust. A sluggish start was to be expected coming off a season-ending knee injury last year, it showed itself in the pre-season when he was throwing picks for fun but in recent weeks, the former Patriot has looked poised in the pocket and perfectly capable of running this Shanahan offense.

In fact, if we go deeper, he leads the NFL in adjusted completion percentage on deep throws (20-plus yards) at 75%, second is Dak Prescott at 64.7%. Of course, he ranks in the bottom third of the league for attempted deep passes but the reason is he’s throwing to a bunch of rookie receivers and there’s a lack of a real deep threat on the team. Without doubt the best receiver on the team is tight end George Kittle who has caught a team-leading 40 passes for 462 yards and a touchdown. The addition of Emmanuel Sanders from Denver will be massive for Garoppolo and this passing offense, which is scary because the passing game is not the most dangerous part of the San Fran offense.

The 49ers lead the league in run play percentage (57.5%), rushing attempted per game (38.9) and rushing touchdowns (13) as well as second for rushing yards per game (181.1). They are coming off a game in which they ran the ball 38 times for 232 yards against the Panthers and they did so without three of their most important pieces on offense in Joe Staley, Mike McGlinchey and full back Kyle Juszcyzk. It’s a running back by committee in San Fran led by Tevin Coleman and Matt Breida. Coleman missed three of the first four games with an injury but since his return in Week 5, he and Breida have been absolutely phenomenal, combining for 529 yards and six scores on just 108 carries, tacking on an additional 86 yards and two touchdowns catching the ball out of the backfield.

Incredibly, three 49ers running backs rank inside the top 13 in the league among RBs with at least 35 carries for yards per attempt with Raheem Mostert second (5.7), Breida fourth (5.3) and Coleman 13th (4.7). Something that speaks to how brilliant the Shanahan scheme is at getting the backs into open space is PFF’s breakaway percentage metric, which shows what runners earn the highest percentage of their yardage on big plays – where again all three rank inside in the top 15 in the league. It’s worth mentioning both Mostert and Breida are questionable here so we may see a lot more of Tevin Coleman but this offense is humming right now so I don’t expect it to matter much.

When I heard all the reports about Kliff Kingsbury and his air raid offense coming to Arizona to be paired with rookie QB Kyler Murray, I did not expect to see this stat: the Cardinals have the fewest turnovers in the NFL (four) through Week 8. That’s despite Murray throwing the ball at least 32 times in seven of eight games so far. I’ve personally been pretty impressed with what Kyler has put together so far. He has shown some great arm talent in throwing for 1,988 yards and seven touchdowns, and when he does take off, he is lightening quick, rushing for 279 yards and another two scores. He has the second-lowest percentage of turnover-worthy plays (1.71%) and ranks middle of the pack for big-time throws (3.42%) according to PFF.

Much like his counterpart tonight, Murray is working with a few rookies and not much else bar the evergreen Larry Fitzgerald at wide receiver, with Christian Kirk unable to stay fit. The lack of a deep threat is evident in the fact he sits in the bottom third of the league by NextGen Stats’ average intended air yards metric at 7.2 yards while PFF have graded less than 20% of his throws positively. In the running game, the Cardinals will be without their two leading runners in David Johnson and Chase Edmonds who was breaking out. This leaves new acquisition Kenyan Drake with a heavy workload right off the bat.

The long and short of it when it comes to this Cardinals defense is they are terrible. They are 29th in scoring defense, 29th in total defense, 28th in yards per play allowed and 23rd on third down. They have given up at least 100 yards rushing in every game so far and held just one team under four yards per carry thus far. That is despite being in the bottom half of the league in percentage of run plays faced (41.73). In the passing game, they have given up 300 yards or more in two of their last three despite the return of Patrick Peterson and they are 29th in the league for passing yards per game allowed (277), 30th in completion percentage allowed (71.2) and dead last for touchdown passes allowed (20).

So what’s the betting?

I’d be pretty confident in the Niners covering the -10 spread here on a normal week, but on a short week with plenty of banged-up starters, it’s entirely likely they play keep-ball here if they get ahead. We may even see some starters rested again in the second half so I’ve gone for the over on the 49ers first-half team total of 13.5. I fancy the Niners to try to put this to bed early in much the same fashion as last week. With the better coach, I suspect they will be much better prepared on a short week than a rookie HC and QB. I like the over if I was to play the total here; like I said, I fancy the 49ers to put up points early but there’s a real chance they rest some starters and the Cardinals close the distance late in the game with some garbage time scores to potentially back door cover.

It’s no secret that the Cardinals have been vulnerable to the tight end position. I suspect this may be a game to get the passing offense going for the 49ers, especially with Sanders getting a full week of training under his belt and the Cardinals allowing a successful pass play 56% of the time according to PFF, which ranks last in the league in a league full of terrible defenses. Kittle has been the most valuable tight end in the league over the last year and with the Cardinals allowing 9.8 yards per play when targeting the tight end you’d expect a big game here. I’m taking the over on Kittle’s yards at 71.5 and I’ll have a bit on him to score.

I’m also taking the over on Kyler Murray’s rushing yard total of 28.5. Pressure up front and great coverage on the back end will lead to one thing –scrambling. He’s only covered this total three times so far (also had 28 against the Giants) but he does scramble a lot – he has gained 160 yards on scrambles.