After winning their last three games, the Chicago Bears travel across the pond to take on the Oakland Raiders in the NFL’s maiden game at the Tottenham Stadium.

Both teams are heading into this game following impressive victories during Week 4. The Bears have the chance to move to a 4-1 record after winning their last three games, including an important and defensively-dominant display against divisional rivals Minnesota Vikings last week, which they won 16-6. The Raiders have been somewhat of a surprise this season so far considering their disappointing outings in 2018. Last week, the soon to be Las Vegas side defeated the Indianapolis Colts 34-24, moving them to a 2-2 record.

The two franchises have only faced off 14 times in the regular season and are currently tied with seven wins apiece. The last time they met was in 2015 where the Bears would narrowly edge the victory 22-20 at Soldier Field. Oakland will be giving up their home advantage for this International Series game. They may not mind this as they have lost all their home games this season but are undefeated away. The Bears are also undefeated away from home this season after securing victories at Denver and Washington. The last time the Illinois team came to London for a game was in 2011. The much-different side defeated the Tampa Bay Buccaneers 24-18 at Wembley. The Raiders, on the other hand, played in England last season, where they were ruthlessly turned over 27-3 by the Seattle Seahawks.

This will be Khalil Mack’s first game against his former side after he was traded to the Bears just before the 2018 season. Mack and Oakland’s 2020 second-round draft pick were traded for a 2019 first-round pick, which the Raiders used to draft Josh Jacobs, and a 2020 first-round pick – a 2019 sixth-round and 2020 third-round selection were also included. The former Buffalo Bull left Oakland mainly due to the team refusing to pay the linebacker what he thought he was worth. The former fifth-overall 2014 draft pick will be determined to show his former team why they should have paid him on Sunday. 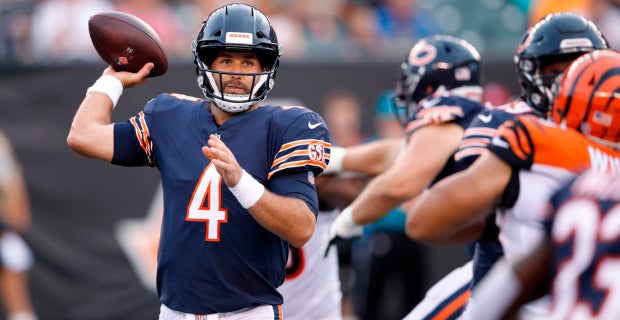 With Mitchell Trubisky suffering a shoulder injury early in the Bears’ last outing against the Minnesota Vikings, Chase Daniel will receive his fifth ever NFL start in his ten-year professional career. The former Heisman Trophy finalist had a solid game when called upon, completing 22 of his 30 passing attempts and scoring a touchdown. Arguably, the most important part of Daniel’s performance was that he bought a sense of calm to his team’s offence, something that seemed to be missing with Trubisky this season.

The passing game may be the best way to unlock the Raiders defence. The Californian side has only given up rushing touchdowns in one game this season, against the then-league rushing leaders Minnesota, whereas they have conceded at least one passing touchdown per game. The 32-year-old quarterback has multiple reliable options to throw to, as proven by the fact that six separate receivers gained ten-or-more yards last week. Unfortunately, the receiver with the most touchdowns for the Bears this season, Taylor Gabriel, will miss the game due to suffering a concussion in Washington two weeks ago.

Converting chances continues to be an issue for Head Coach Matt Nagy’s side, no matter which quarterback they use. The offence has only scored five touchdowns this season, four passing and one rushing, and continuously waste important chances from good positions. This was shown last week as they managed only one touchdown despite three visits to the red zone. Luckily, kicker Eddy Piñeiro has been scoring points when the team stalls out. The former Raider has been responsible for 23 points this season and has only missed one attempt. While Piñeiro has proven to be reliable, the offence needs to step up and reduce the kicker’s workload if they are to secure a win at the Tottenham Stadium.

Whilst the offense may still be underperforming, the Monsters of the Midway, the Bears’ defense, are on fire. Everyone who watches the NFL knows how good Khalil Mack, Eddie Jackson, Akiem Hicks and the rest of the starters are, however, against the Vikings, the Bears’ depth chart quality was bought to the forefront. Back-ups Nick Kwiatkoski, Roy Robinson-Harris and Nick Williams all had stellar games against Minnesota, with the latter making the NFL Fans UK Team Of The Week alongside his fellow defensive lineman Eddie Goldman. The units dominance was on display last Sunday as they held one of the best rushing teams in the league to just 40 yards at Soldier Field.

The Bears will have to be prepared to face another strong rushing unit in England. The Raiders running backs have enjoyed a good season thus far, with the most notable of them being the supremely talented Josh Jacobs. The rookie has managed to gain 307 rushing yards in his first four NFL games. The Bears as a whole have only managed 361 rushing yards, highlighting how impressive and dangerous the 2019 24th-overall pick can be. Eddie Goldman, Danny Trevathan, Roy Robinson-Harris and Nick Williams, who will continue to play in Akiem Hicks’ absence, will likely be in charge of stopping the young star, similar to how they were used to stop Delvin Cook last week. The trio should have a returning Roquan Smith to limit the damage Jacobs will cause too.

While the rushing unit may be the priority, the Bears cannot overlook Derick Carr and the Raiders passing game. Carr has thrown for 888 yards this season with six touchdowns to his name. His favourite target has been tight end Darren Waller, who tied Antonio Gates’ record for most receptions for a tight end through his teams first four games of the season with 33. The Bears, however, have one of, if not, the best pass rush units in the league, spearheaded by the incredible Khalil Mack. The Monsters of the Midway have 17 sacks between them this season, third in the league with one less than New England and Carolina. They also lead the league in turnovers with eight, with the majority of these being strips-sacks. If Oakland does try to utilise their passing game, Carr and company must be sure to release the ball early or be prepared to be mauled by Chicago’s dangerous defence.

While I do not want to underestimate the Raiders team at all, I believe that the Bears will have enough to continue their hot streak and make it four wins in a row. As per usual for this team this season, I cannot see it being a high-scoring affair at all. This is due to the red-hot, Mack-led defense and the offence’s inability to regularly convert chances. I think that the Raiders rushing game will cause issues for Chicago’s defense, however, they may be able to absorb the damage in a similar way they did against Dalvin Cook’s Vikings last week.

Chase Daniel will not necessarily need to be a hero in London. However, he will have to continue bringing his calming effect to the offensive line and play a safe game to lead his team to victory. I can see the very first English Club Dub being opened in the Tottenham locker room this week as I predict the Bears will win by one score.