The Monsters of the Midway dominated, Mitchel Trubisky joined the injury list and the back-ups shone as the Chicago Bears secured their first divisional victory of the season against the Minnesota Vikings.

Before kickoff, it was announced that key players Taylor Gabriel, Kyle Long, Akiem Hicks, Bilal Nichols and Roquan Smith would all miss the huge divisional showdown, due to various injuries and personal reasons. This left the fans in Illinois incredibly worried about their chances against the in-form Vikings. The Minnesota team came into this game with a 2-1 record, after dominating the Oakland Raiders a week prior. They were also second in the league for average rushing yards per game (197.7). However, some unlikely heroes stepped up to extend the Bears’ winning streak to three.

In the very first drive, quarterback Mitchel Trubisky, fresh from his best performance of the season against the Washington Redskins, fumbled the ball after being slammed to the floor, landing awkwardly on his shoulder in the process. The play was luckily called back for defensive holding but the former second overall pick was forced to leave the game. This appears to be his second shoulder injury in two seasons, but it appears to be the other shoulder this time. 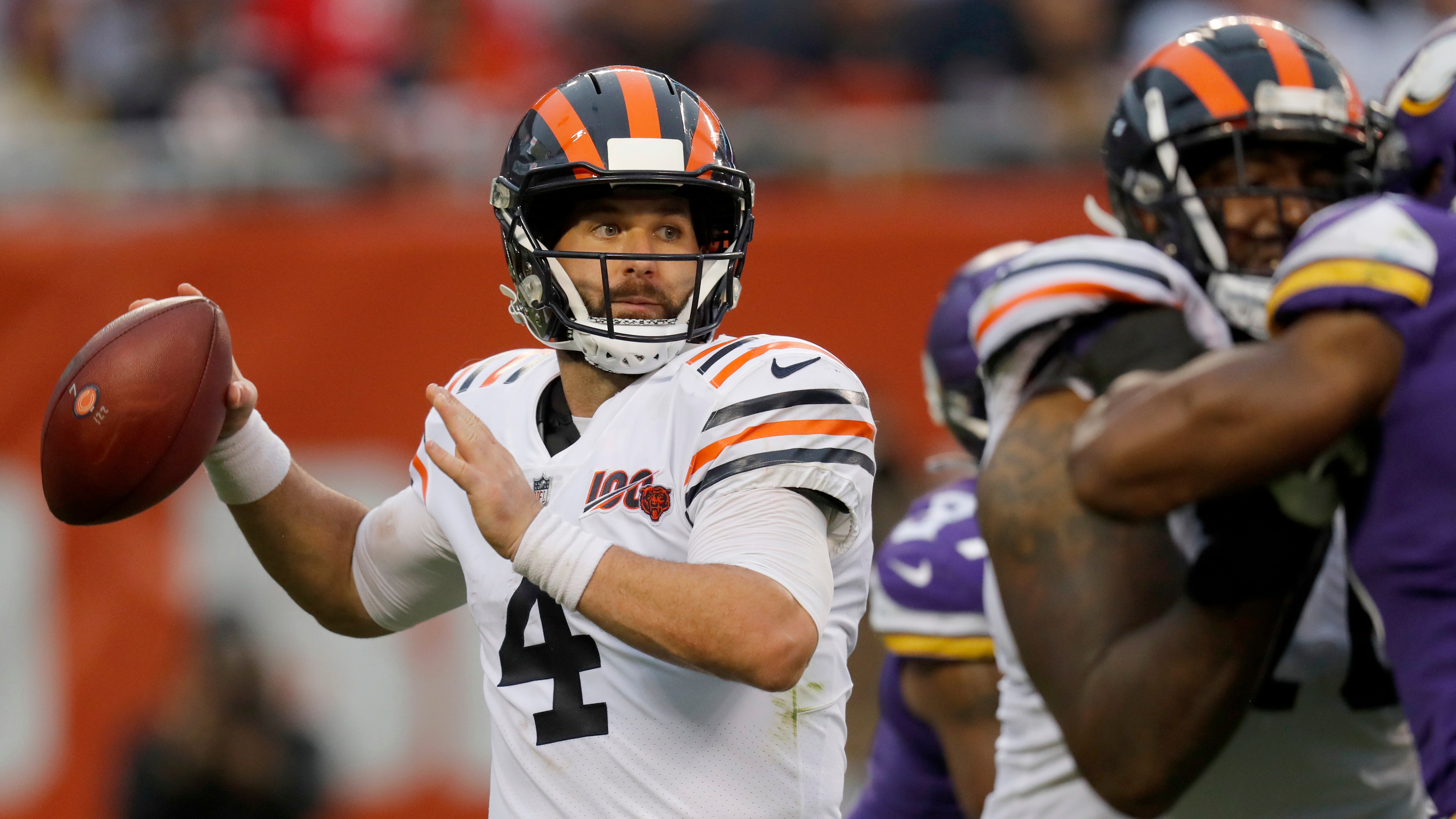 The veteran backup quarterback Chase Daniel, who only has four NFL starts in his career, was forced to enter the action. Daniel continued the opening drive with calmness and composure in the pocket, something often missing with Trubisky at the helm. After managing to get his team into a second-and-goal position, the 32-year-old Texan managed to find running back Tarik Cohen, who has faced criticism for his early-season form, on the six-yard line. Cohen caught the ball in his stride and took it into the end zone, capping off a fantastic 14-play, 75-yard opening drive.

Last week, the Monsters of the Midway, Chicago Bears’ defense, dominated the Redskins and their terrific form continued this week at Soldier Field. Roy Robinson-Harris, in what could be a breakout year for him, hammered Vikings quarterback Kirk Cousins for their first sack of the game in the second quarter. The famed defense appeared to be its own worst enemy at times though. The unit gave up seven penalties in the first two quarters alone. Although discipline may have been an issue, their talent still shone through.

The first turnover of the game occurred when Bears cornerback Prince Amukamara managed to punch the ball out of Vikes wide receiver Stefon Diggs’ hands after a successful catch, with safety Ha Ha Clinton-Dix recovering the loose ball. The play was initially called an incomplete pass, but Head Coach Matt Nagy successfully challenged the call.

The Bears managed to get into the Vikings’ red zone following the turnover after some confident plays by Chase Daniel, including two third-down conversions, and bad decision making by the Purple and Gold team. They would ultimately be forced to end the half with a field goal attempt. Kicker Eddy Piñeiro, who was questionable all week due to a knee injury, converted from 25 yards and Chicago went into the break with a 10-0 lead. 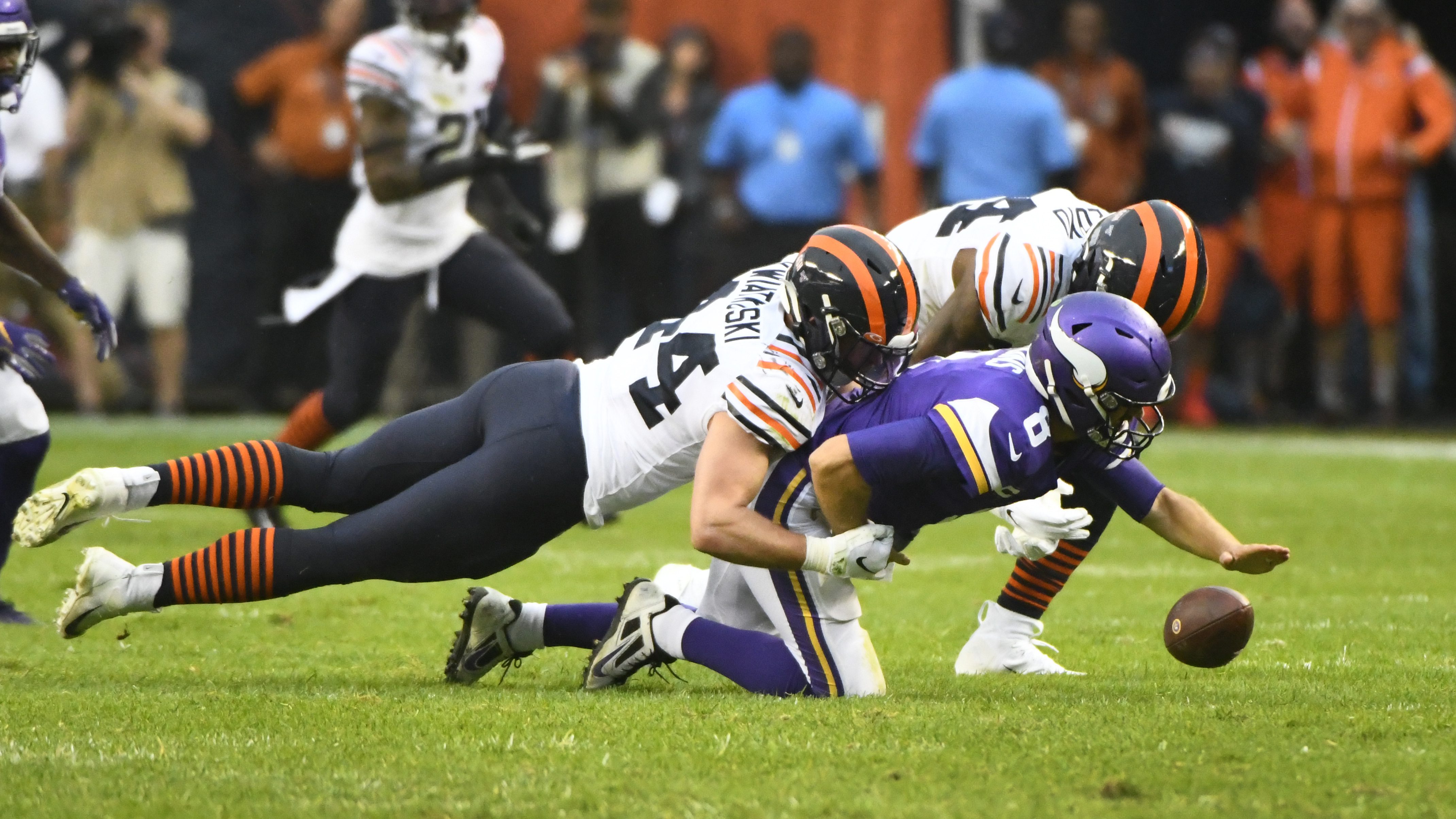 The Vikings received the ball to start the second half. That apparently did not sit well with Bears outside linebacker Khalil Mack, so he quickly took action. The defensive superstar obliterated the Minnesota backfield on the first play of the half and performed his now-signature strip-sack on a helpless Kirk Cousins, his second in two games, with defensive end Nick Williams recovering it for the home side. Despite the strong position they found themselves in, Chicago’s offense failed to convert this opportunity into a touchdown. They would still score on the drive as Eddy Piñeiro would convert his second field goal attempt of the game from 38 yards to extend the Bears’ lead.

After three short drives in a row shared between the two sides, one of which included another sack for the impressive Roy Robinson-Harris, the Bears once again stormed into Vikings territory. During this nine-play, 67-yard drive, Chase Daniel managed to pick out the 2018 seventh-round pick Javon Wims with a 37-yard pass down the sideline, the best pass of the day for Chicago. Minnesota once again halted Matt Nagy’s men from reaching the end zone but was powerless to prevent Piñeiro from converting his third FG of the day from 30 yards.

Nick Williams and Nick Kwiatkoski would join in the defensive fun with third-quarter sacks. Kwiatkoski even channelled his inner Khalil Mack, performing his own strip-sack on Cousins, although the Vikings recovered the ball in this occasion. Both Nicks would combine to force the Bears’ sixth sack of the game in the fourth quarter. Kwiatkoski quite literally threw a Vikes offensive lineman at Cousins, causing him to run straight into the arms of Williams.

Minnesota would get on the board in the fourth quarter. Elite running back Dalvin Cook managed to punch the ball into the end zone from the 2-yard line after a huge, 13-play, 92-yard drive. The former Florida State man had been quiet up until this point with the Bears’ running defense, most notably the fear-inducing Eddie Goldman, suffocating the life out of the Vikings’ running game. The away side would attempt a two-point conversion after the touchdown but the Bears’ defense would not be caught out. Prince Amukamara swallowed up Stefon Diggs after a quick throw, keeping the Bears 10 points ahead.

Chicago’s offence would go three-and-out in the next drive but managed to force their divisional rivals to use all their timeouts in the process. The Monsters of the Midway stood strong and withheld the final attack that Cousins and company could muster up, allowing the clock to drain and for the Bears to secure their first win at home this season.

The Bears’ depth chart quality was on full display at Soldier Field. Chase Daniel, Nick Williams, Abdullah Anderson, Nick Kwiatkoski, Roy Robinson-Harris and Javon Wims were all thrust into the spotlight with key players missing through injuries and personal reasons. Each one of them stepped up when they were needed and had noteworthy performances, but Daniel, Williams and Robinson-Harris were the standouts from this group.

Daniel went 22-of-30 in passing attempts with a touchdown and no interceptions. More importantly, he bought a sense of calm to the Bears’ offense, something that has been missing all season. Williams made seven tackles with two sacks while Robinson-Harris, who has been impressive all season, contributed to one-and-a-half sacks and three tackles. My personal player of the match, however, was linebacker Nick Kwiatkoski. The Pennsylvania native was destructive throughout the game, making a Bears-high nine tackles and contributed to one sack.

Matt Nagy’s play-calling and organisation has gone from strength to strength since his much-criticised performance against the Packers. Most importantly, the former Arena Football star seems to be learning from his previous mistakes and is now close to getting the best out of his team. Chuck Pagano, the Bears’ Defensive Coordinator, set up his unit almost perfectly. The former Indianapolis Colts Head Coach managed to suppress the Vikings’ most dangerous weapon this season, Dalvin Cook. The Bears kept the Vikes running unit to a season-low 40 rushing yards in 16 attempts. He also encouraged the team to pressure the shaky Kirk Cousins, forcing him to panic and make mistakes throughout the game.

The Bears now move to second place in the NFC North with a 3-1 record. For their next game, the boys will be heading across the pond for an international series games against Khalil Mack’s old team, the Oakland Raiders. If the team performs as they did against the Vikings at the Tottenham Stadium next Sunday, you can expect the first English Club Dub to be open in the nation’s capital.