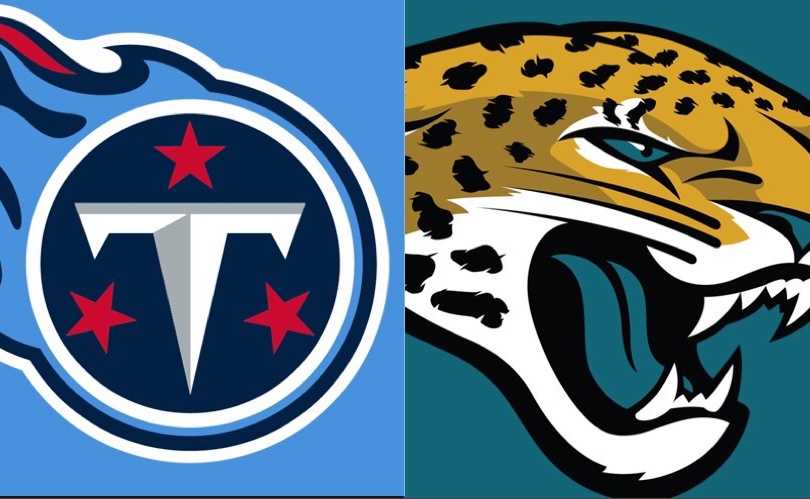 Things started out badly for the Tennessee Titans in their Thursday night visit to TIAA bank field with a botched punt return in the torrential Florida rain, and they never really got any better. For the Jacksonville Jaguars, however, Thursday Night Football handed them a first win of the season thanks to their Rookie QB.

The storyline of this game was the excessive penalties that all but destroyed the game flow in the first half. As ESPN’s broadcast pointed out, heading into this match holding penalties through the previous two weeks of football were up 64% against the first two weeks of the 2018 season, and the yellow flags littered the field throughout this game.

I wrote in my preview for this game that I thought this would be decided by each team’s star running backs, and which defense could generate turnovers. Welp! For large portions of the night, both rushing attacks were a non-factor, until a short Derrick Henry touchdown plunge early in the fourth quarter. And after Adoree’ Jackson fumbled the aforementioned punt following Jacksonville going three and out on their opening drive, neither defense managed to take the football away.

A seven-yard play-action throw to tight end James O’Shaughnessy opened the scoring, and then Minshew led a fantastic third drive which he capped by a beautiful 22-yard over-the-top throw to DJ Chark which doubled the Jaguars’ lead. Chark, who Tennessee cornerback Malcolm Butler really struggled to cover, made 4 catches for 76 yards and a touchdown.

On the other side of the ball, the Jacksonville defense was the best unit on the field all game. Outside of one good fourth-quarter drive that Marcus Mariota and company put together, the Jags played more conservative football, and the Titans got blown away. This looked like the 2017 Jacksonville D that carried Blake Bortles to the playoffs.

Defensive lineman Calais Campbell has to be a strong contender for AFC defensive player of the week, with three sacks of Mariota the result of a whole game bullying the Titans offensive line. Special mention also goes to pass rushers Josh Allen and Dawuane Smoot, as well as cornerback AJ Bouye who all but took Tennessee receiver AJ Brown out of the game.

I saw a lot of indecision in Titans QB Marcus Mariota over his first two outings this season, and while he hadn’t fixed that entirely on Thursday night, it certainly wasn’t his offense’s worst issue. The offensive line, still missing left tackle Taylor Lewan, was completely outmatched by the talented, deep Jaguars defensive line to the tune of nine sacks and a lot of hurries. The holding penalties didn’t help, wiping out most of the few good Derrick Henry runs early on. The one bright spot for the Tennessee offense I saw was wide receiver Tajae Sharpe, who got open a few times with some excellent route running and physical play against the Jacksonville secondary.

Coming back to the Jaguars offense, quarterback Gardner Minshew had another excellent outing, playing once again well beyond the expectations for a sixth-round rookie. The offense struggled for a lot of the game after the two first-quarter touchdowns, punting six times and scoring only two field goals. This wasn’t really the fault of Minshew, who completed 20 passes on 30 attempts for 204 yards, and picked up another 18 yards on the ground. The was before he also ripped off a 69-yard run late in the fourth quarter.

If you are really looking for somebody who struggled and didn’t have a great game then look no further than Leonard Fournette. The Jags running back had a total of -8 yards rushing in the game.

The Tennessee defense seemed to be using the game plan that has worked so well the past few years against the Blake Bortles led Jaguars; stop Fournette and let the QB lose them the game. However, Minshew did exactly what was needed to win. I was also impressed with his ball security, after three fumbles last week against Houston, the rookie barely made a mistake in this game, outside of a couple of errant sidelines throws in the windy conditions.

The rookie never forced plays, happy to take short runs or check-down throws on third down and punt, rather than risk giving the Titans a way back into the contest. Outside of how effectively Fournette was neutralized, the one concern I have with the Jaguars offense this week is Dede Westbrook, who dropped three very catchable passes, one of which was a beautiful rainbow pass from Minshew that would have been a touchdown.

Besides the heavy-handed officiating, the big storyline headed into this game was Jalen Ramsey’s trade request. A few pundits criticized the decision to play Ramsey and risking an injury while the Jags are listening to trade offers, but I liked the commitment to winning the game, and the decision to play was reportedly as much Ramsey’s decision as to the coaching staff. I did feel like the Jags played a lot more man coverage than the prior two weeks, but I suspect that has more to do with having AJ Bouye back in the lineup and the specific game plan rather than an attempt to appease the star cornerback.

The #Jaguars win, and CB Jalen Ramsey gets out unscathed in what may be his last game with Jacksonville. Ramsey wanted to play for his teammates, JAX wanted to win and both got what they wanted. Friday will be interesting.

While I have somewhat made my peace with the idea of Ramsey leaving, there’s now a real possibility we end Sunday with all four AFC South teams sitting at 1-2, with the Texans and Colts facing tough games against the Los Angeles Chargers and Atlanta Falcons respectively. Unless the Jaguars get an offer for Ramsey that they can’t pass up, I think they should keep him this year. The playoffs are not out of reach.